In March 2022, in the midst of government speeches about the positive results of the so-called Territorial Control Plan in El Salvador and following a wave of murders perpetrated by criminal groups in the country (called "maras" or gangs), the Bukele administration decreed a State of Exception. The Salvadoran Constitution allows for this measure to be invoked in emergency situations, and it triggers a set of restrictions on certain rights and guarantees. These include freedom of expression, association, and assembly as well as the right to a defense, to know the reason for being arrested, to see a judge within 72 hours, among others. Although the State of Exception is a fixture of the Salvadoran Constitution, organizations point out that international law allows countries to suspend some human rights under very limited circumstances, which do not appear to apply in the current case.

Since the State of Exception was decreed, police and Armed Forces have committed a series of human rights violations that have been denounced by relatives of detained persons and human rights organizations. Multiple civil society and social movement groups (including Equipo Maíz below) have used their platforms to issue statements of objection, concern, and demands--principally regarding information of loved ones detained.

Due to the uncertainty caused by the lack of information on where and why people are being held--many of whom who have no links to criminal structures but were detained only for living in dangerous places, for having tattoos, or even in some cases for responding "badly" to the police--and the uncertainty about the conditions in which they are being held, families and loved ones mobilized a series of street actions, demanding their release.

In the absence of any response from the Salvadoran state, families and loved one continued these actions, which ultimately led to the formation of a movement called MOVIR: "Movement of Victims of the Regime." As MOVIR, they have petitioned the Legislative Assembly to repeal the State of Exception, release their detained loved ones, and approve a law of compensation and moral and material reparation for the victims.

The groups that make up MOVIR state that they will not stop fighting until they see their innocent loved ones released. They will continue mobilizing to demand information to help locate their loved ones. They call on all people, whether inside or outside El Salvador, to show solidarity and make known this problem that has hit the population hard.

Below is an analysis of MOVIR from popular education organization Libros Equipo Maíz. Translated by CISPES and reprinted with permission. The original in Spanish follows.

The Movement of Victims of the Regimen (MOVIR) called on the Legislative Assembly to free the thousands of people arbitrarily and illegitimately captured and imprisoned and to end the State of Exception. Instead, the ruling right-wing legislators extended it for another month.

Members of MOVIR—consisting of relatives of people unjustly imprisoned during the State of Exception—held a rally in front of the Legislative Assembly, where they raised their voices to:

A. Hold President Bukele and the legislators servile to the administration responsible for the torture suffered by thousands of people imprisoned without evidence and for the death of at least 69 prisoners!

B. Charge the Government with turning State institutions into "instruments of hell" that persecute impoverished people who have not committed crimes only because they live in places where a gang presence is presumed. There are currently 3,100 registered reports of violations of rights in prisons and detention centers.

C. Underscore that the State of Exception is only for poor people, including thousands of innocent people: It does not apply to white-collar criminals, those at the top, those who govern, those who traffic drugs and weapons, those who evade taxes, or those who steal from the State. Those people are protected by the government.

D. Denounce that the families of prisoners are also suffering torture, especially grandmothers, mothers, sisters, and partners who visit the prisons without finding their relatives; they do not know where they are or what their physical and mental health are like, not to mention the economic expense of these trips [to the prisons]. There are families who have learned that their relatives are not in prison, but instead are dead and some even buried in mass graves.

MOVIR calls on President Buekle to be accountable for all those killed in prison and accuses him of bloodying the country. The movement demands that he reverse course and reminds him that neither he nor his deputies will remain in office forever.

The double standards of the right-wing legislators

Among the legislators who approved the State of Exception and who threaten the people, there are some who have signs of being involved in drug trafficking and other crimes of corruption; however, the Attorney General’s Office is not investigating them and is instead staying silent.

The State of Exception serves the government by saying that it is fighting crime and also allows it to spend money without regulation while maintaining agreements with gang leaders, according to several media outlets. The government wants to divert attention from the problems suffered by the population, including unemployment and hunger; to terrorize communities; and to imprison social leaders. It is an electoral strategy that is targeting the most impoverished communities.

But as one of the leaders of MOVIR said: "They can take away our freedom but not our hope." The people's struggle continues to grow. 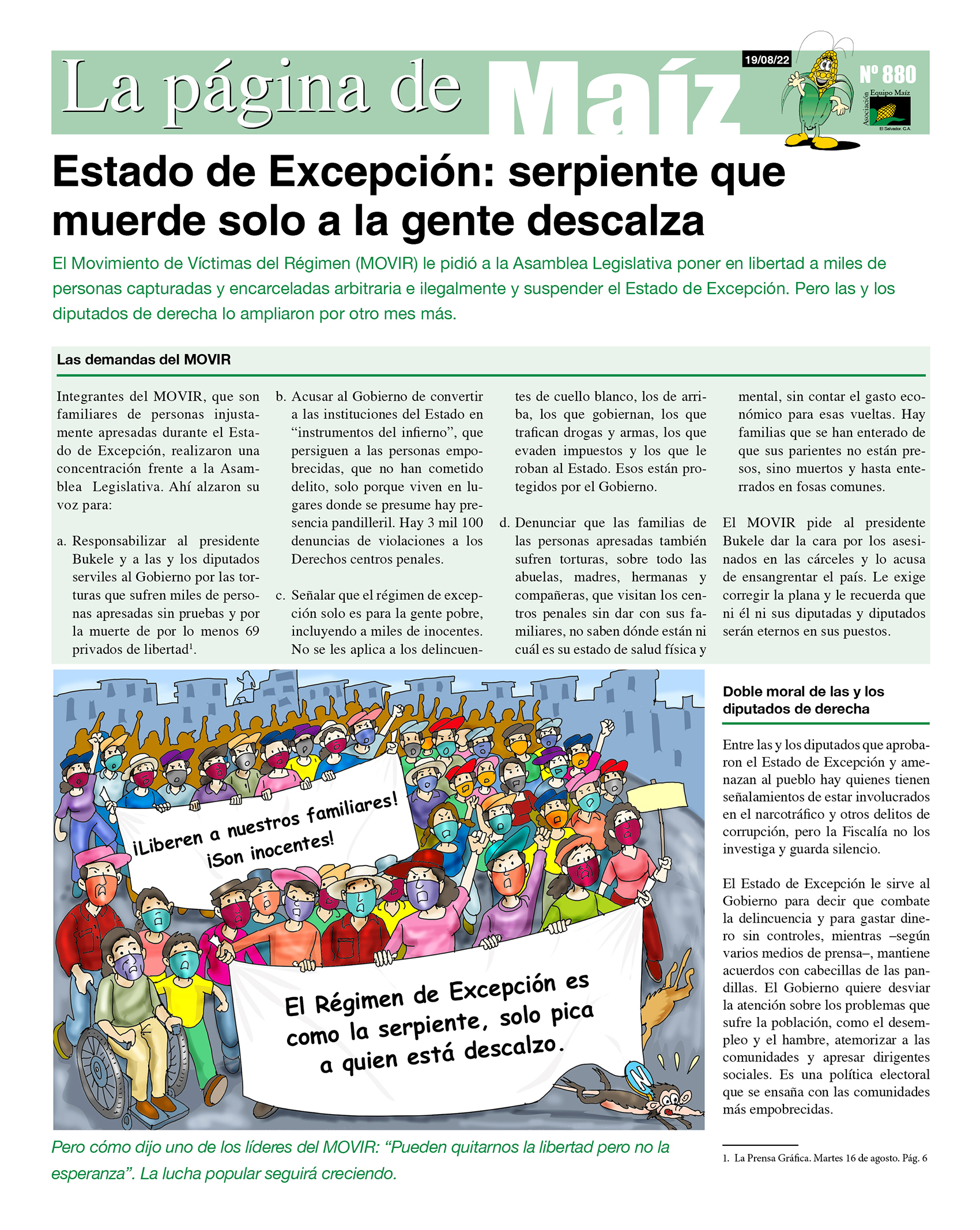