On Monday March 31st, Spanish judge Eloy Velasco announced he would continue to move forward with a case against 20 former Salvadoran military officers accused of carrying out the 1989 massacre of six Jesuit priests, their housekeeper and her daughter at the Central American University (UCA) in El Salvador. The officers all received training at the US-run School of the Americas. Judge Velasco’s announcement comes as a response to recently approved restrictions to Spain’s legal doctrine of universal jurisdiction implemented last month. Judge Velasco has stated that he considers these new limitations “illogical,” and is moving forward with the case by dropping the crime against humanity charge in favor of terrorist murder charges against the Salvadoran military officers accused in the case. He maintains that the case is still under Spanish jurisdiction, given that five of the eight victims were Spanish citizens.

The Universal Jurisdiction law has served as a model for international human rights law since its approval in 1985, and allowed Spanish courts to prosecute crimes against humanity regardless of where they were committed or the perpetrator’s nationality. On March 15, under pressure from foreign governments, the conservative People’s Party, which currently holds a legislative majority as well as the presidency in Spain, reformed the law, greatly restricting its reach. The reforms require the shelving of open international humans rights cases, most notably several cases of massacres by Chinese forces in Tibet, the murder of Spanish reporter José Couso by U.S. soldiers in the early days of the Iraq War, and the Jesuit massacre case.  The United States has tried to limit the use of universal jurisdiction in other countries in the past, and has even even refused to ratify its own membership to the UN’s International Criminal Court.

Meanwhile, the families of victims of the countless human rights violations and crimes against humanity committed by El Salvador’s military, former security forces and collaborating death squads during the Civil War (1980-1992) continue to clamor for justice. Until recently, international courts had been their only hope for justice due to the 1993 approval of an Amnesty Law that prohibits the prosecution of these crimes domestically. However, last year El Salvador’s Supreme Court accepted a case challenging the constitutionality of the Amnesty Law, a case that is still pending. The survivors and victims of these human rights abuses, and the human rights community as a whole, anxiously await the final ruling.

A Step Forward in Justice for 1989 Jesuit Massacre 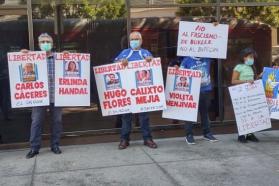