Week of Action for Romero Culminates in Immense Peace March

On March 26, a half million white-clad marchers filled streets across El Salvador and Salvadoran immigrants gathered in several U.S. cities in a massive mobilization for peace, justice and respect for human life. The march followed a week of activities honoring the 35th anniversary of Archbishop Oscar Romero’s martyrdom at the hands of US-trained right-wing paramilitary death squads.

The Peace March initiative originated in El Salvador’s National Citizen Security and Coexistence Council as a nation-wide call to stand together against violence and fear. Schools, churches and community organizations participated in the mobilization, and March 26 was declared a national holiday by El Salvador’s Legislative Assembly. In San Salvador, vast celebratory parades convened at the Salvador del Mundo monument, where President Salvador Sánchez Cerén, called on all Salvadorans to “be active agents and protagonists of peace, life and hope,” and affirmed that “the love and legacy of Monseñor Romero encourages our desire to build a country in peace and harmony.”

The March for Peace came two days after the anniversary of the 1980 assassination of Archbishop Oscar Romero, who will be beatified in ceremony in El Salvador on May 23. Acts of remembrance began on Saturday, March 21, with a procession of thousands to the National Cathedral for a mass and vigil. On Tuesday, March 24, a popular ceremony was held at the Divina Providencia Chapel, where Romero was gunned down by a right-wing death squad during mass, followed by a march to the Cathedral. President Salvador Sánchez Cerén addressed the worshippers gathered at Divina Providencia on Tuesday, as did Human Rights Ombudsman David Morales, who declared that Romero “was victim of an extrajudicial execution by a death squad; death squads, including that which assassinated Monseñor Romero, functioned with the tolerance, support, and financing of the State, as well as powerful sectors that dominated the country with their economic power,” and called for an end to impunity. 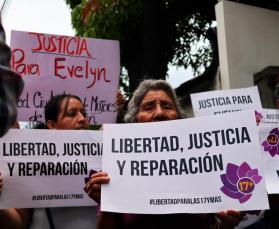