On January 11, Salvadoran police arrested five leaders of the rural community of Santa Marta, including the director of the Development Association of El Salvador (ADES), Antonio Pacheco (known to many as Chico Montes).

Santa Marta, a community resettled by refugees from who fled to Honduras amidst horrific state violence during the armed conflict and with historic ties to El Salvador’s revolutionary struggle, is recognized as a model for community organizing, not only in El Salvador but internationally. ADES and the broader community of Santa Marta were on the forefront of the successful fight to ban metallic mining, and other definitive struggles in defense of land, water, environmental, and community rights.

Yesterday, representatives of rural, popular and social movement organizations held press conference where they decried the arrests as "an act of persecution and political vengeance" in the framework of the government's "offensive" against community organizations.

Whether the arrests aim to intimidate and demobilize potential opposition to unpopular proposals like metallic mining and water privatization or indicate the government's intentions to punish former members of the revolutionary guerrilla forces while allowing countless horrors and crimes against humanity committed by state forces and members of right-wing political parties in impunity, they are of extreme concern and necessitate immediate repudiation at all levels.

CISPES expresses our complete solidarity with the community of Santa Marta as they face this attack and join with popular movement organizations in El Salvador and international allies in calling on the Attorney General, Rodolfo Delgado, to immediate release the five community leaders who have been detained, and on the government of El Salvador to end its crusade of criminalization and persecution against the grassroots opposition.

To the national and international community, civil society organizations, friends of Santa Marta and the ADES association, we send urgent information:

In the early hours of the morning of January 11, 2023, the Attorney General's Office of the Republic and the National Civil Police, executed an administrative order for the arrest of Miguel Ángel Gámez, Alejandro Laínez García and Pedro Antonio Rivas Laínez in the community of Santa Marta in the municipality of Victoria. Simultaneously they captured Teodoro Antonio Pacheco and Saúl Agustín Rivas Ortega at the offices of the ADES Santa Marta Association in the municipality of Guacotecti.

In front of inhabitants of the Santa Marta community, the Attorney General’s office read the arrest and search warrant, where the aforementioned compañeros are accused of being tied to a case that occurred during "the armed conflict," adding the charge of illicit associations as well, with all the weight that the term carries in the current Salvadoran context [of the State of Exception].

This framing suggests the rapid construction of a case, the real purpose of which is to attack the Santa Marta community and the ADES Association by attacking its leadership.

In light of this, we want to point out the following:
1. We find it outrageous and suspicious that, almost 31 years after the end of the Salvadoran civil war and more than 40 years after the atrocities committed against the civilian population of Santa Marta, where countless human rights violations and crimes against humanity were committed, for which the Salvadoran state was unable to prosecute a single case, when they claim to act today, they do so in order to re-victimize the same community in something that seems to all appearances to be a political vendetta.

2. The spokespersons of the prosecutor's office present in the community assured that the case has nothing to do with the State of Exception, so we hope that the initial hearing will be held within 72 hours and due process will be followed.

3. Santa Marta and ADES will denounce and demand a process in accordance with the law, without the use of the procedures of the State of Exception and where respect for human rights and justice prevails.

4. Santa Marta and ADES demand respect for the physical and moral integrity of the compañeros captured early this morning under suspicious circumstances.

5. Santa Marta and ADES alert public opinion and civil society organizations about the risk of continuing this type of capture in the circumstances described above.

Public statement on the arrest of members of Santa Marta and ADES
Press statement of Salvadoran environmental, social and popular organizations (Jan 12)
(Watch the press conference in Spanish here)https://www.facebook.com/watch/live/?ref=watch_permalink&v=528785095897023

During the early morning hours of Wednesday, January 11, representatives of the Attorney General's Office (FGR) and agents of the National Civil Police (PNC) detained Miguel Ángel Gámez, Alejandro Laínez García and Pedro Antonio Rivas, members of the Santa Marta community, a repopulated community made up of former refugees and combatants of the civil war, located in the municipality of Victoria, department of Cabañas.

In a simultaneous operation, carried out on the same day and time, in the municipality of Guacotecti, in the same department, state agents also arrested Teodoro Antonio Pacheco, executive director of the Association for Social Economic Development (ADES), made up of residents of Santa Marta; and Saúl Agustín Rivas, legal advisor of the aforementioned community organization.

All of these individuals are accused of committing a murder during the civil war (1980-1992) and of illicit associations. This latter crime is related to the narrative of the current State of Exception and is totally out of place in this case because the detainees have no gang affiliation.

In light of this event, the undersigned organizations publicly express the following:

1. Our full support, recognition and solidarity to the Santa Marta community and ADES, against whom this dubious judicial proceeding against their members and representatives intends to disqualify, discredit and intimidate. Santa Marta is an exemplary community that has achieved an enormous level of social development like no other rural population in the area; and ADES has contributed enormously to the country, especially in environmental protection in areas such as the fight against metallic mining.

2. We are not opposed to investigating crimes committed during the civil war. In fact, several of our organizations have fought over the last three decades for the knowledge of the truth, the vindication of the victims, and the true application of justice. However, the actions taken against the members of Santa Marta and ADES do not appear to be a genuine attempt at justice, but rather an act of persecution and political venegance, in the framework of a state offensive against community and civil society organizations that - in the case of ADES - could be related to the current government's intentions to resume mining exploitation projects.

3. The accusation against members of Santa Marta and ADES clearly demonstrates the double standards of this regime regarding the crimes committed during the civil war and shows its selectivity in the application of justice, since at the same time it refuses to investigate and prosecute those responsible for crimes against humanity committed by the Armed Forces and right-wing paramilitary groups, including the massacres perpetrated in Santa Marta and surrounding communities by troops of Military Detachment No. 2 of Sensuntepeque, led by the recently deceased Colonel Sigfredo Ochoa Pérez.

4. The case also confirms the absurd logic of criminalizing the victims instead of prosecuting the perpetrators: the Santa Marta community is a victim of the massacres and exile it suffered, but the State did not attend to its demands for justice for 30 years and now prefers to prosecute five of its members. The system treats the victims as victimizers and the victimizers as victims. It is "justice in reverse".

Therefore, in the face of such an aberrant situation, we demand that the judicial proceedings against the members of Santa Marta and ADES be transparent and respect human rights, especially given the serious doubts generated by the lack of judicial independence, institutionality, and rule of law. We also demand that the process be carried out outside the provisions of the state of exception; and that the detainees are released to face any proceedings.

Similarly, we demand that the government end the disqualification, stigmatization and persecution against the communities and their organizations. We ask the International Community to be attentive to what is happening in the country and to accompany the denunciation of the organizations whose only purpose is to contribute to the improvement of the quality of life and the holistic development of the Salvadoran population, especially of the most vulnerable sectors. 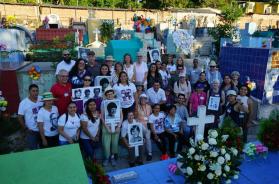