A short history and reflection on the occasion, from Equipo Maíz in their weekly publication "Pagina De Maiz", translated by CISPES. Download Spanish language PDF, here.

On January 22, Father Rutilio Grande and two Campesinos, who were murdered on March 12, 1977 by the military-oligarchic dictatorship of the time, [were beatified]. Father Cosme Spessoto, assassinated in 1980 in San Juan Nonualco, La Paz, will also be venerated. The church thus recognizes the dedication of those who gave their lives for an El Salvador with justice and equity.

Who was Rutilio Grande and who murdered him?
Rutilio was born in 1928 in the municipality of El Paisnal. He was a Jesuit priest, defender of the causes of the people, and friend of Archbishop Oscar Romero. In 1972 he was named parish priest of the municipality of Aguilares. He also worked in the El Paisnal community.

In his pastoral work, Father Rutilio promoted the creation of the Ecclesial Base Communities, made up of people mostly of peasant origin, where reality was analyzed critically in the light of the Gospel, prompting organized action in the face of the repressive dictatorial government of the time. The land-owning oligarchy and the government [at that time] saw in that organizational capacity a threat to its power.

On March 12, 1977, Rutilio was assassinated by the death squads--paramilitary groups linked to the Armed Forces and financed by oligarchic sectors. Campesinos Manuel Solorzano, 72, and Nelson Rutilio Lemus, 16, also died in the ambush.

Monsignor Romero went to where Rutilio was being held, and after meetings with priests, nuns, and catechists he ordered all parish masses to be canceled for the following Sunday and instead to celebrate a single mass in San Salvador as demand for the government to investigate the murders. 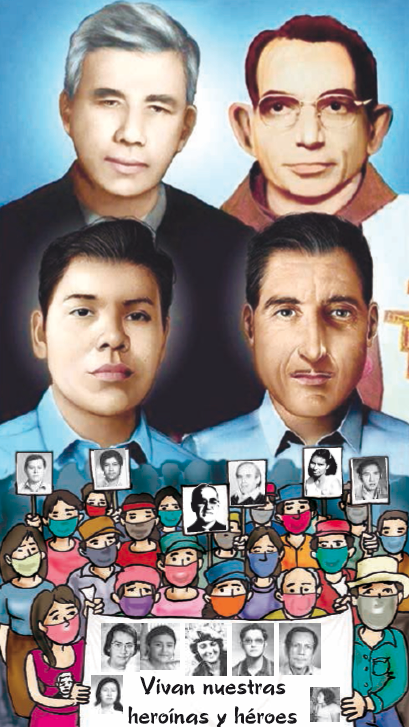 The violence of the time
The murders of Rutilio, Manuel, Nelson, and Cosme were among the many acts of violence against the people committed by the military-oligarchic dictatorship that had ruled the country for 45 years. During all that time, thousands of peasants, trade unionists, teachers, catechists, young people were persecuted, imprisoned, disappeared, and killed by the regime.

The repression and the closure of political spaces forced the people to create political and then military instruments to confront the dictatorship. The 12-year war—and the Peace Accords signed afterward to put an end to the war and the dictatorship—were the result of that reality that the people bravely faced.

We will not return to the past
President Nayib Bukele is pushing the country back to the time in which Rutilio, Manuel, Nelson, Cosme, and Monsignor Romero lived: he persecutes, slanders, and imprisons those who oppose his government, foments public corruption, violates laws, dismisses, and imposes judges and magistrates, and manipulates use of the Armed Forces.

But the people, who are again fighting in the streets, inspired by their martyrs, heroes, and heroines, will not allow a new dictatorship to be consolidated.