Victims of El Mozote: "The Case Could See a Great Setback"

On August 31, the New Ideas (Nuevas Ideas) coalition–controlled legislature voted (63 out of 84) to approve reforms to the Judicial Careers Law forcing all judicial employees older than sixty years of age or with more than thirty years of service into early retirement. These changes have brought judicial functioning to a halt as the Bukele regime attempts to eliminate judicial independence by bringing the courts under his purview. This decision is also having negative repercussions on cases of major national and international interest like the case against perpetrators of the 1981 El Mozote massacre, whose judge is among those unconstitutionally ousted by changes to the law.

In response to the legislature's decision, judge Jorge Guzmán, the local judge in San Francisco Gotera who is presiding over the El Mozote trial, announced his resignation, indicating that he will not return to office unless the reforms to the Judicial Careers Law are repealed.

Victims' families have expressed sadness that "the case could see a great setback" with the removal of Judge Guzmán. The Association in Defense of Human Rights of El Mozote also lamented the recent reforms given that Judge Guzmán “is the only person who has accumulated enough evidence to move forward the case of the El Mozote massacre." 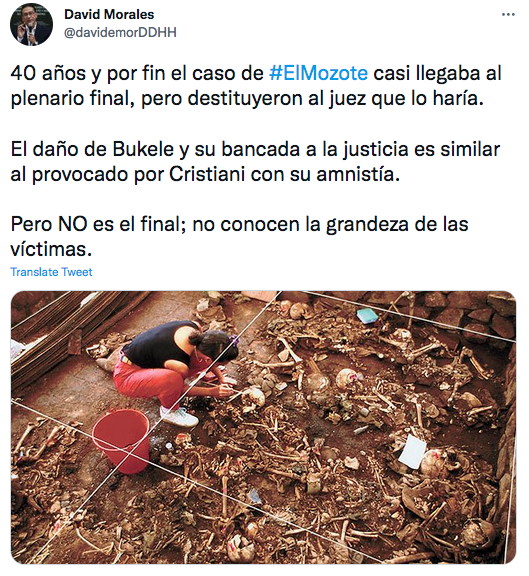 Translation of Tweet by former Human Rights Ombudsman, David Morales: "40 years and finally the case of #ElMozote had almost reached the final plenary, but they dismissed the judge who would head it. The damage Bukele and his bench have done to justice is similar to that caused by Cristiani with his amnesty [law]. But this is NOT the end; they do not know the greatness of the victims."

Guzmán, who reopened the case five years ago following the repeal of the Amnesty Law, has repeatedly told the press that his decision "is not a whim, but rather, a demand that the Constitution be respected."

According to Ovidio Mauricio, director of  the María Julia Hernández Legal Association (Tutela Legal María Julia Hernández), the judicial reforms could delay the judicial process in the El Mozote case, given that "they represent one more obstacle in the investigation of the case.” Likewise the Inter-American Court of Human Rights has rejected the reforms and has also asked the Salvadoran government to report on the impact these reforms will have on the investigation of the massacre at El Mozote and surrounding areas.

The El Mozote case is the only major case among wartime human rights abuses committed by the Salvadoran government to see any progress since the the Amnesty Law was declared unconstitutional in 2016. Currently, at least thirteen members of the Armed Forces involved in the case have been identified and are being prosecuted; however, no person has yet been sentenced.

Guzmán has faced various obstacles in his role as the judge overseeing the case, including insistence by the Ministry of Defense that military files from that period “do not exist." This insistence comes despite the fact that President Nayib Bukele offered, on national television, to declassify and deliver said files.

This year, marks 40 years since the genocide was committed by members of the Salvadoran army. It is a year replete with setbacks, which include the recent passing of Wilfredo Medrano, a member of the María Julia Hernández Legal Association and a lawyer accompanying the victims of the massacre. Despite these challenges, the families of victims of El Mozote remain steadfast in their resolve to bring the intellectual authors of the crime to justice.

A popular outdoor market in San Salvador, where vendors sell fruits and vegetables, beans, coffee, cheeses, and other staples--the costs of which have all increased dramatically in the past year. Photo credit: CISPES.

Organizations that make up the National Roundtable against Metallic Mining in El Salvador hold a press conference alerting the population to the risk of a return to metal mining. Photo credit: Mesa Nacional frente a la Minería Metálica en El Salvador.