The Attorney General of El Salvador has charged 21 former government officials and members of the Salvadoran business elite with embezzlement and falsifying documents in the deal for 2002 public-private partnership (P3) contract that allowed the Italian energy company Enel Green Power to move to take over the state geothermal energy company. The case marks one of the largest corruption investigations ever carried out against former government officials in the country’s history; the Attorney General has calculated the state’s losses at $1,824,929.05 as a result of the state’s contract with Enel. The Attorney General convened a Special Commission in February to investigate the case at the request of President Funes, who has refused to accept a January decision by the International Chamber of Commerce to allow Enel to buy a majority of shares in the national energy company. Calling the contract “disguised privatization,” Funes called for an investigation into the contract that allowed for this lucrative public company to pass into private, hands. “That the Attorney General is bringing a corruption case to trial is very positive, coming from a [prior] context in which few cases of corruption were ever prosecuted,” noted Abram Abrego of the Foundation for the Study of Applied Law (FESPAD). A report by the National Legislative Assembly recommended that former President Francisco Flores of the right-wing Nationalist Republican Alliance (ARENA) party be prosecuted for his role in overseeing the deal during his administration. While Flores is not named in the Attorney General’s investigation, among those charged is the former president’s brother-in-law, José Antonio Rodriguez Rivas, along with Pedro José Escalon Pacas, the brother-in-law of another former ARENA President, Armando Calderón Sol. The list also includes several former members of the board of directors for the public energy company that owns LaGeo, appointed during past ARENA administrations, and business leaders in the ARENA party. The Attorney General is calling for immediate detention of the nine suspects accused of embezzlement and the freezing of assets and bank accounts of all 21 suspects, but the decision falls to the presiding judge in the case. “This means that there was a plan from the Executive, from the government of President Flores, to sell LaGeo at a laughable price and force the losses on the state,” said President Funes. Coming on the heels of major corruption charges brought against 18 businessmen and former government officials from the ARENA administration of Tony Saca (a current presidential candidate with the right-wing UNITY coalition), the LaGeo charges are the latest battle in the current government’s crusade against the corruption and cronyism of past administrations that have robbed the Salvadoran state of untold sums of public funds. The theft of state resources, starting with a wave of privatizations in the 1990s, turned public opinion against privatization in El Salvador; now the country is under enormous pressure from the US State Department to open up its remaining state industries to P3s. Threats from the US Embassy to withhold Millenium Challenge Corporation (MCC) funding forced the passage of a controversial P3 Law this spring, from which the FMLN was able to exclude essential services like healthcare, water and education. Now the Ambassador is again ransoming the MCC funds for reforms to the P3 Law that could undo the FMLN’s efforts to protect key sectors from its scope. In this context, the scandal surrounding the LaGeo contract is a grim and timely reminder of the tenuous line between P3s and privatizations. 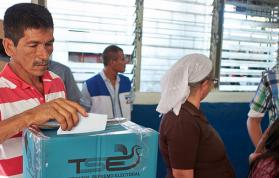