On March 22, World Water Day, the National Alliance against Water Privatization led a march to El Salvador’s Legislative Assembly to present their demands, chanting “Sin agua y sin semillas no hay tortillas” (Without water and without seeds, there are no tortillas), “Sin agua no hay futuro” (Without water there is no future), “El agua es un derecho y no una mercancía” (Water is a right, not something to sell).

One of the primary goals of the march was to call upon the Legislative Assembly to immediately resume discussion of and approve the General Water Law, which would prioritize the needs of the people over private and corporate interests. This year’s march, which La Vanguardia reports was second only to Argentina in terms of size, also marks fifteen years since the first proposal for a water law to protect the human right to water was presented on behalf of the Salvadoran people, a fact that movement leaders repeatedly emphasized in their comments to the press.

The General Water Law, introduced once again at the start of the 2018 legislative session by the leftist Farabundo Martí National Liberation Front (FMLN) party in coordination with diverse social movement organizations, has been stalled in the legislative commission for over a year after the president of the commission, representing the right-wing Nationalist Republican Alliance (ARENA) party, abandoned the process of moving a bill forward to the full assembly.

With a new legislature taking office on June 1, which will be overwhelmingly dominated by President Bukele’s New Ideas party and close right-wing ally, the Grand National Alliance (GANA), social movement organizations called on the current legislators to finish the job they started before the pandemic. As Omar Flores from the Foundation for Studies for the Application of Law (FESPAD) urged, “We're 24 days away from this legislature ending and leaving this debt, despite the advances that have been made in the legislative commission for the Environment and Climate Change in these past few years.” 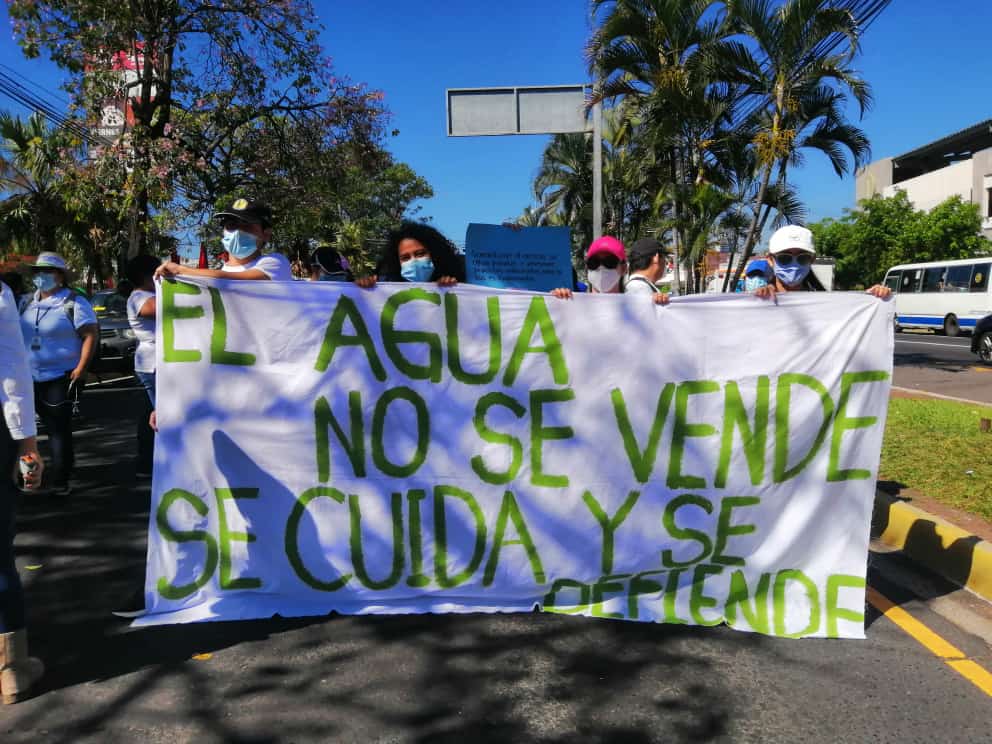 As Morena Murillo of the National Health Forum told the press, “We demand that this law be approved. Five legislative periods have gone by without it being approved. We want the legislators to do everything possible to pass it - there are no excuses. During the past fifteen years that we have been calling on the legislature, there have been many obstacles and setbacks from the political parties that defend the interests of big business. They’re always trying to limit the participation of the citizens, who are opposed to economically powerful groups [having a say over water use], like the sugar cane industry, water bottling companies or the agricultural industry that profit off of this natural resource.”

Providing a perspective on the gendered impact and injustice of the current water crisis, Carolina Amaya from the Salvadoran Ecological Unit (UNES) noted that, under the patriarchal system that exists in El Salvador, women often “have the role of caring for the family, of caring for the community, of caring for men. To do this work of cleaning, preparing food, making sure their family is healthy, they need water. And of course, this is also reinforced by the capitalist system because when the sugar cane industry cuts off their water, they can't fulfil these obligations ... [So] it's women who are most affected when ill-planned projects come in to manage water in their community or privatize it.”

Other organizations who joined the march spoke out against the hypocrisy of the Bukele administration when it comes to General Water Law, for example, talking about respect for the human right to water while the Ministry of the Environment and Natural Resources doles out permits for projects that could have severely detrimental impacts on water quality and access.

“We have a water commissioner who goes about passing out food [during the pandemic] but who has not met with the organizations who, for fifteen years, have been working to guarantee the human right to water. Sure, it sounds nice when they give speeches, but they aren't in reality making any effort to work with us," said Amalia López, from the Women’s Movement of Santo Tomás. 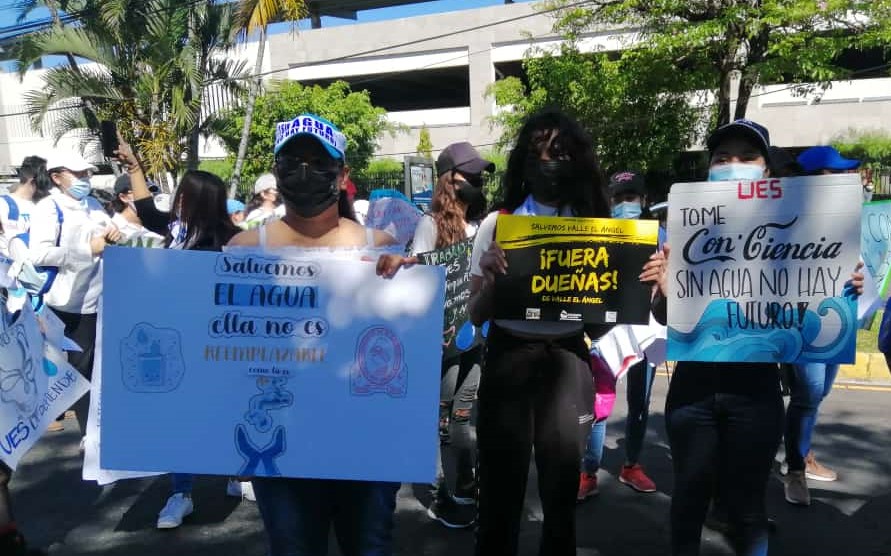 Other demands that the movement put forward during the march on World Water Day included:

Social movement representatives also denounced the wire barricades and armed police forces that met the march upon arrival at the Legislative Assembly and initially prevented them from delivering the official correspondence with their proposals. They called on the Bukele administration to respect citizen's concerns and demands and, in the future, not to receive them with military force.

Earlier this month, the National Roundtable against Metallic Mining also held a press conference in which they expressed concerns that landmark legislation currently protecting El Salvador’s water sources from the threat of metallic mining may be in jeopardy.

On April 28, 2017, the Salvadoran legislature voted to ban metallic mining, making El Salvador the first country in the world to so do. However, leading environmental and human rights organizations warn that this achievement could be overturned under the incoming legislature. 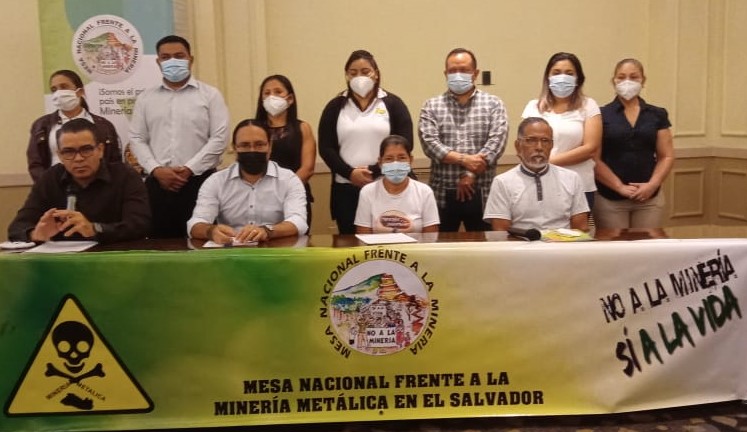 During the press conference, Saúl Baños, Executive Director of FESPAD stated, “It must be remembered that the President of the Republic has been saying since June 2019 that he did not have a [legislature] at his command. Now, given the results of the February 28 elections, his hope is fulfilled - to have an assembly favorable to his administration - and with this comes the threat of reversing the law.”

According to Vidalina Morales, from the Development Association of El Salvador in Santa Marta (ADES), “Seeing the interests of this government and its commitment to developing urban, tourist, or other projects of that nature, at the expense and destruction and dispossession of the communities, at the risk of pollution and contamination, there is concern in our communities that the threat of mining may return. Our struggle was not small, we've been here for twelve years, and we have been saying that mining is not viable for the country and we have expressed this in various studies.”

The National Roundtable’s new report, Systematizing the Antimining Struggle in El Salvador, outlines their struggle to protect the country's water and land from the threat of gold mining (download it here in Spanish) and concludes that two of the keys to their victory in this David versus Goliath struggle were the organizing structures within the threatened communities and the resoluteness of their decision to reject metallic mining, elements that may need to be mobilized again in the new political panorama. 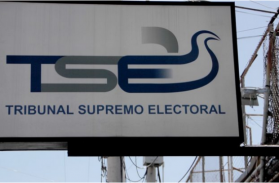 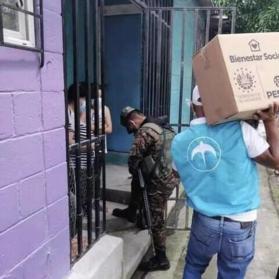