On Friday afternoon, as President Barack Obama and Vice President Joe Biden met at the White House with the presidents of Honduras, Guatemala, and El Salvador to discuss the increasing numbers of Central American children crossing the border into the United States, activists gathered outside to call on the US government to take responsibility for its role in causing this crisis, to respect the children’s legal and human rights and prioritize family reunification in the United States.

Activists from Washington DC-based immigrant service groups, Central American policy and human rights organizations, and religious groups chanted “When migrant children are under attack, what do you do? Stand up, fight back!” and held signs that read “Protect refugees of failed US policies” and  “CAFTA + CARSI = Forced Migration,” in reference to the US-Central American Free Trade Agreement and the US-funded Central American Regional Security Initiative.

This year alone 57,000 unaccompanied migrant children have been detained at the US-Mexico border, with about 75% of them coming from Honduras, Guatemala, and El Salvador. Most of them are fleeing situations of extreme violence and trying to reunite with a parent who came to the US in the past decade due to a lack of economic opportunities at home.

Speakers at the protest highlighted how US-pushed economic policies like privatizations and free trade destroyed local Central American economies, forcing many of the children’s parents to migrate and fostering conditions for street gangs to take root in impoverished communities. Arturo Viscarra from School of the Americas Watch explained how militarized security policies that are part of the US-sponsored War on Drugs have only made narco-violence worse and empowered human rights abusing military and security forces in Guatemala and Honduras. He also denounced the role of the Obama administration in legitimizing the 2009 coup d’états in Honduras that has ushered in an era of violent repression against community activists and journalists, giving Honduras the highest murder rate in the world.

In his meeting with the Central American presidents, Obama affirmed that most of the children will be deported and proposed a program that would allow Honduran children to apply for refugee status in their home countries before making the perilous migrant journey. Officials say approximately 1,000-2,000 children might be eligible for refugee status under this program, a very small percentage of the tens of thousands that are fleeing their homes, meaning the program would unlikely curb the massive flow of migrant children.

Legislative proposals to address the crisis focus on more funding for border enforcement and regional militarized security programs as well as plans to fast track the children’s deportations. Those present at the demonstration were encouraged to call the White House and their elected representatives in Congress to tell them not to reverse the Trafficking Victims Protection Reauthorization Act of 2008 which guarantees all detained immigrant children the right to a trial with legal representation, as proposed, and to fund health and human services initiatives in Central America, rather than border and regional militarization efforts. 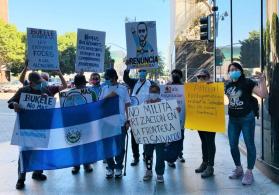 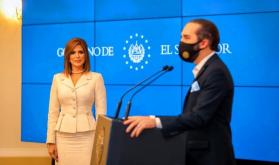 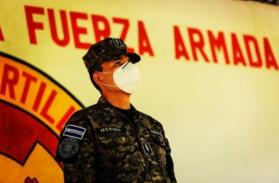